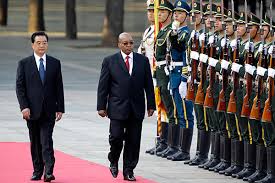 Across Africa, China has become known as the agent of mass construction, wisely bartering infrastructural development – chiefly mining-specific – for long-term access to strategic resources. In the process, China foregoes the usual Western opium, of capital returns from the sale of resources.

But then China has no need for capital returns. One primary reason for Beijing’s policy banks such as China Export-Import Bank (China Exim) earmarking 79 per cent of investment to mining-specific development (including mega-dams, railways, roads, and ports) is to recycle Beijing’s foreign exchange reserves (estimated at US$3 trillion) into Africa. Another, as outlined by the China Exim clause, is redirecting China’s cheapened goods – such as cement, and labour, to Africa, amounting to no less than 50 per cent of total contract value.

Through this mechanism, Ghanaian cocoa, Gabonese iron and Congolese oil have been swapped for construction of dams (Bui, Poubara, and River Dam), allowing Chinese corporations such as Sinohydro to capture the bulk of Africa’s hydropower market. The ‘barter system’ thus enables China to export goods and labour, facilitating for China the opportunity to ‘import’ their recycled project capital in addition to African resources. In the process, China has activated arguably the same ‘Western’ capitalist vehicles of engagement but with one noticeable difference: Prior to Beijing’s entrance, just 4 per cent of foreign direct investment was earmarked for infrastructure. But China leaves behind more than an empty hole in the ground; it has constructed stadiums across the continent, as well as buildings and special economic zones (SEZ). Some scholars say this is beneficial as China has shown just one ‘face’ in their dealings, driving to create in Africa, special economic zones of the type that catalysed China’s own growth and industrialisation.

Since inception, China’s leading SEZ Shenzhen – shaped under Communist Party leader Deng Xiaopeng, has attracted powerful names and foreign investment portfolios of Western corporations such as Walmart. These days, Shenzhen hosts a population of more than 4.5 million people. But while China has auctioned their ‘Open Door Policy’ of the late 1980s to Africa – the corporate fiscal and para-fiscal paradise in all its glory – aligning the characteristics of these political economies would be a mistake.

Unlike in Zambia, for instance, where China lobbied for and established a special economic zone, the home country government is not in the driver’s seat. Rather, it remains a rent-seeking entity, capitulating to enclave ‘tax advantageous’ economic zones designed to export resources beneficiated by Chinese companies back to China, while remitting the bulk of export revenue to said companies. While the chief interest of Western corporations operating in China is the SEZ, for the China, SEZs are a peripheral element to the central ‘Going Out’ policy, shifting ‘over-compensated’ industries, no longer economically advantageous to China, to developing countries. China’s line is that selective industrialisation will benefit developing countries through beneficiation and reduced import of cheap goods.

Ten African governments allegedly expressed an interest in setting up SEZs. While Tanzania and Cape Verde were rejected, Nigeria, Egypt, Ethiopia, Mauritius and Zambia were given the green light. The SEZs differ in ownership: Some, like Ethiopia and Mauritius are owned outright while others like Nigeria’s Ogun State hold shares (18 per cent). Chinese companies took the lead with over 120 companies bidding, hosted by the Ministry of Commerce, People’s Republic of China (MOFCOM). In Zambia, the SEZ was located in Chambishi (with a subzone in Lusaka), and developed by China Nonferrous Mining Group (CNMC). Initiated in 2003, the Chambishi SEZ has grown from 2km2 to 11.58 km2, focusing on copper and cobalt processing. The Lusaka SEZ (5km2) focuses on garments, food, appliances, tobacco and electronics.

As Deborah Brautigam, a leading specialist on China disclosed, perks for Chinese corporate developers include access to US$29-44 million in grants and long-terms loans of up to US$294 million. Other performance-based subsidies included reimbursement for half of their moving expense; 30 per cent of the costs of SEZ development including preconstruction (securing land, preparing tender bids, feasibility studies etc) and implementation (insurance, rent or purchase of land, facilities etc). Corporate developers may also benefit from provincial subsidies (accounting for Ethiopia’s US$14m grant from Suzhou) or from another policy entity, such as the China Africa Development Fund under the umbrella of the China Development Bank. Brautigam notes that although many Chinese companies are state-owned, the company may be the main actor. Brautigam refers to Dan Haglund (2009) quote from a financial profession on Beijing’s role in the Chambishi zone: ‘Usually you have representation coming through the Chinese government, through the CNMC then they will have chats with the government [of Zambia], just like when they were signing in this Chambishi SEZ.’ Yet, even if promoted as private investment, most – if not all – Chinese equity is intertwined with State-State capital, rendering the intent deeply political.

The CNMC itself, for instance, is a large state-owned entity under the direct supervision China’s State-owned Asset Supervision and Administration Commission (SASAC), a government arm. Haglund writes that while the Chinese government does not get involved in the day-to-day operation of overseas Chinese enterprises, Beijing has a strong interest in setting policy objectives and monitoring firms alignment with said strategies. ‘Policy implementation takes place through an institutional framework of bureaucratic entities under the PRC State Council. However this system may not be as formalized as suggested…In a highly hierarchical state structure where strategically important firms are closely associated with political decision makers, some SOE executives are higher up the chain of command than SASAC officials.’

A deputy director working for the Ministry of Commerce notes: ‘Some of the managers/CEOs of the big SOEs, their position in the system of China’s officials is higher than the leader of the SASAC – so it is difficult, if the SASAC wants to change that person, maybe they have to get the support of the Premier. And sometimes they will even require President Hu Jintao.’

But China is eager to appear fair: When Zambia’s Minister of Trade and Industry offered to create special Chinese-only enclaves, China responded by welcoming foreign investors. At Chambishi, the CNMC – aiming for 40 Chinese, and 10 foreign entities by 2011 – has established 13 subsidiary companies designed to process minerals and otherwise closely connected to mined resources, allegedly creating 2,000 jobs in the process. In exchange for building the Chambishi Copper Smelter, pegged to process 150,000 tonnes annually, and create 600 jobs, Chinese companies receive an SEZ tax rate of 0 per cent.

Deep in the heart of Zambia’s copperbelt, the previously closed Chambishi mine, holding 33 million tonnes of proved copper reserves and a further 100 million tonnes of potential reserves, was re-opened by China in 2005. CNMC owns 85 per cent of the mine with the remaining 15 per cent held by Zambia’s ZCCM Holdings. Copper concentrates from Chambishi and other mines will be transported to the smelter, projected to generate an additional US$300 million in export revenue accruing to the owners (CNMC holds a 60 per cent share). But who ultimately pays the price of development and what sort of mispricing occurs? Governance specialist Lena Hasle said about perks allocated to China, ‘no one here knew about it, including all those people in the donor community who speak to the Ministry of Finance every day …It was completely unannounced beforehand, nobody knew that Zambia has to have export-processing zones where you had no taxes.’

Johan Lagerkvist, a senior research fellow from the Swedish Institute for International Affairs quoted a Zambian economist who stated with irritation, ‘On paper the zone looks good, and if implemented it would also be good. But later on the initial Chinese contractor for the zone, said it was no longer feasible – it was too expensive. So now they wanted Zambia to borrow money from China to pay for the buildup.’ Lagerkvist put the same question to a local official in Ndola, the capital of the Copperbelt who responded, ‘I can tell you that in fact everyone is in the dark. You know, even if you are a boss from cabinet office they still won’t let you into their zone! Even when the minister of the Copperbelt was to attend an enterprise presentation, the Chinese delegation did not care about translation.’

Though Zambia was pegged as the third largest recipient of Chinese investment in Africa, Zambian labour unions appear to less thrilled with the premise of Chinese FDI as the means of national development, stating, ‘Chinese FDI has had modest impact on national development…with overall negative impacts on the labour market.’ Critics say that China has heeded complaints with CNMC now increasing salaries by 12-15 per cent. But of the 10 per cent of labour in Zambia utilised by mines, the bulk is subcontracted, often deferred for months, and remitting just US$30- US$50 per month to miners when salaries are paid. On the subject of ‘exported’ Chinese labour and its effect on Zambian workers, Zambia’s former Minister of Commerce argued that China was, ‘displacing local people and causing a lot of friction. You have Chinese laborers here moving wheelbarrows. That’s not the kind of investment we need.’

But China certainly needs Zambia to need China. The country is Africa’s largest copper exporter, producing over 800,000 tonnes a year (2010); and China leads the world’s demand, elevating price per tonne (ppt) to a high of US$10,000. In contrast to another major copper producer, Chile, Zambia’s copper industry is largely privatised, previously hosting one of the world’s lowest royalty rates (0.6 per cent) with a corporate tax rate of ‘effectively zero’ according to the World Bank’s IFC (once deferments etc were factored in).

Despite Zambia since increasing copper royalty rates to 3 per cent, after missing out on the five year commodity boom, Zambian president Rupiah Banda has ruled out windfall taxes and generally opposed measures designed to prevent mispricing and other forms of revenue leakages. Copper is said to contribute just under 3 per cent of the Zambian government’s real revenue. As the agent of mass construction, China is certainly leaving behind a tangible footprint. And thus far, all roads, railways and SEZs appear to lead back to China.